Converting the Parse Tree to an NFA #

In the last post, we transformed the flat string representation of a regular expression to the hierarchical parse tree form. In this post we’ll transform the parse tree to a state machine. The state machine linearizes the regex components into a graph, producing an “a follows b follows c” relationship. The graph representation will make it easier to evaluate against a potential string.

Why make yet another transformation just to match a regex?

It would certainly be possible to translate directly from a string to a state machine. You could even attempt to evaluate the regex directly from the parse tree or the string. Doing this, however, would likely involve significantly more complicated code. By slowly lowering the level of abstraction, we can ensure that the code at each stage is easy to understand and reason about. This is especially important when building something like a regular expression evaluator with literally infinite edge cases.

We’ll be creating a state machine called an NFA, or nondeterministic finite automata. It has two types of components: states and transitions. When we diagram it, states will be represented as circles and transitions will be arrows. The match state will be a double circle. If a transition is labeled, it means that we must consume that character from the input to make that transition. Transitions can also be unlabeled – that means that we can make the transition without consuming input. Aside: In other literature, you may see this represented as ε. This state machine represents the simple regex “ab”:

Our nodes can have multiple valid subsequent states for a given input, as in the following diagram where there are two paths consuming the same input leaving a node:

Contrast this with deterministic finite automata, where, as the name suggests, a given input can only result in one state change. This relaxation in constraints will make evaluating it a bit more tricky, but it makes it much easier to generate them from our tree, as we’ll see shortly. Fundamentally, NFAs and DFAs are equivalent in the state machines they can represent.

Let’s lay out a strategy for transforming our parse tree info an NFA. While it may seem daunting, we’ll see that by breaking the process into composable pieces, it can be straightforward. Recall the syntax elements that we’ll need to transform:

Next lets examine concatenation. To concatenate two components of the parse tree, we just need to link them together with a empty arrow. Note that in this example, just as a Concat can contain the concatenation of two arbitrary regular expressions, A and B in the diagram can both be state machines, not just individual states. Something a little bit weird happens if A and B are both literals. How do we connect two arrows together with no intervening states? The answer is that when necessary, literals can have phantom states at each end to make our state machine sound. Concat(A, B) would transform to:

To represent Or(A, B) we need to branch from the start state into the two separate states. Once those machines terminate, they must both point to the subsequent (Out) state:

Lets consider *. Star can be 0 or more repetitions of a pattern. To do that, we want one wire pointing directly to the next state, and one looping back to our current state via A. A* would look like:

For +, we’ll use a little trick. a+ is just aa*. Generalizing, Plus(A) can be rewritten to Concat(A, Repeat(A)) We’ll rewrite it to that, rather than designing a special pattern for it. I’ve included + in the language for a specific reason: to demonstrate how other, more complicated regular expression elements that I’ve omitted can often be expressed in terms of our language.

Now that we’ve made a theoretical plan, lets dive in to how we’ll actually code it. We’ll be creating a mutable graph to store our tree. While I’d prefer immutability, making immutable graphs is annoyingly difficult, and I’m lazy.

If we were to try to boil the above diagrams into core components, we’d end up with three types of components: arrows that consume input, the match state, and one state splitting into two states. I know this seems a little odd, and potentially incomplete. You’ll have to trust me that this choice leads to the cleanest code. Here are our 3 NFA component classes:

Aside: I made Match a case class instead of a regular class. Case classes in Scala bring certain sensible defaults to your class. I used it because it gives value based equality. This makes all Match objects equal, a useful property. For the other types of NFA components, we want reference equality.

Our code will recursively traverse our syntax tree, keeping an andThen object as a parameter. andThen is the what we will attach to the free hanging outputs of our expression. This is required because from an aribtrary branch in your syntax tree, you lack the context of what comes next – andThen allows us pass that context down as we recurse. It also gives us an easy way to append the Match state.

When it comes time to handle Repeat we’ll run into a problem. The andThen for Repeat is the split operator itself. To deal with this issue, we’ll introduce a placeholder to let us bind it later. We’ll represent the placeholder with this class:

The var in Placeholder means the pointingTo is mutable. It is the isolated bit of mutability allowing us easily create a cyclical graph. All the other members are immutable.

To start things off, andThen is Match() – this means that we’ll create a state machine matching our Regex which can then transfer to the Match state without consuming anymore input. The code is short but dense:

And we’re done! The word to line of code ratio in this post is high – each line encodes a lot of information, but boils down the the transformations we discussed in the previous section. I should clarify I didn’t just sit down and write the code like this – getting it this short and to the point was the result of several iterations on the data-structures and algorithm. Clean code is hard.

In the debugging process, I wrote a quick script to generate dot files from NFAs so I could look at the NFAs I was actually generating to debug issues. Note that the NFAs this code generates contain lots of unnecessary transitions and states – When writing this, I’ve tried to keep the code as simple as possible, at the cost of performance. Here are some examples for simple regular expressions: 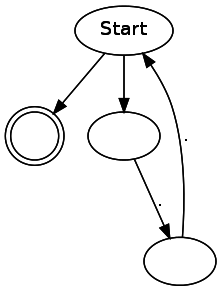 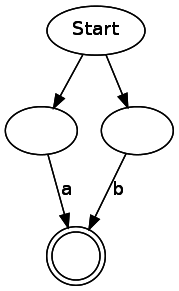 Now that we have an NFA (the hard part) all we have to do is evaluate it (the easier part). Part 3 focusing on evaluating an NFA concludes up this series.

How Postgres Unique Constraints Can Cause Deadlock