After 4 days climbing long moderates in Tuolumne Meadows, Eben and I were stoked to get out of the park for the weekend and escape the crowds on some eastside alpine rock. 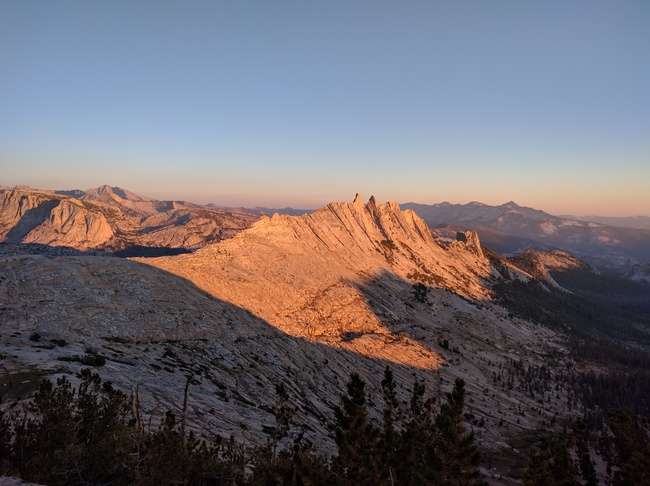 After a few minutes of flipping through the guidebook, we settled on the North Arete on Bear Creek Spire. The granite prow of Bear Creek Spire rises to 13713’, roughly 1500’ above the scree at its base. The North Arete climbs the steep north ridge line through 10 pitches up to the summit. With just one crux 5.8 pitch and 7 pitches of easy fifth, it seemed like a good match for all the moderate simul-climbing we’d done in Tuolumne the week before. 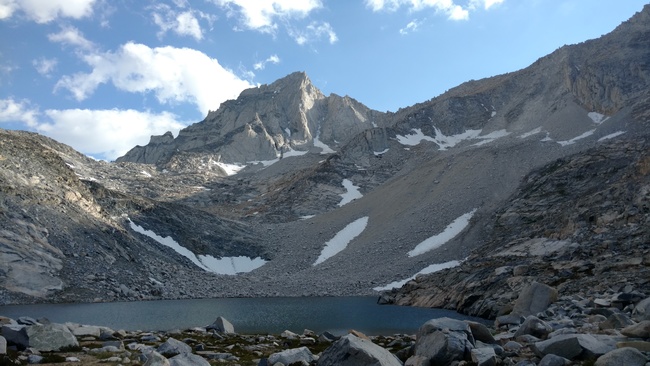 While we could have tackled the route in a long day, with a 4-5 hour hike to the base coupled with 10 pitches up to 5.8, we decided to hike in the day before. The hike in on its own is worth doing, following a well maintained trail winding past innumerable alpine lakes. Eventually, we branched off the trail for an hour of talus scrambling up to Dade lake, where we camped for the evening. 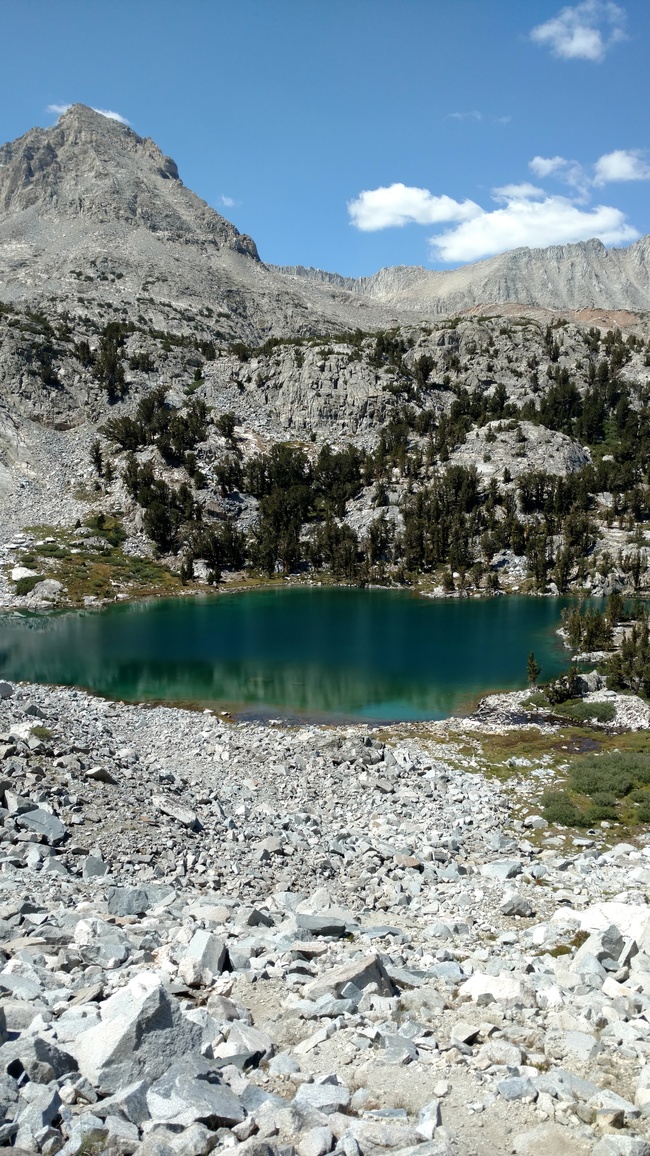 Dade lake is a popular overnight for climbers and is set up with a number of plush bivy sites, complete with rock walls to help block the strong evening winds. We arrived around 3pm, with plenty of time to relax and enjoy the scenery, before snarfing down some freeze-dried backpacking meals and heading to bed early. 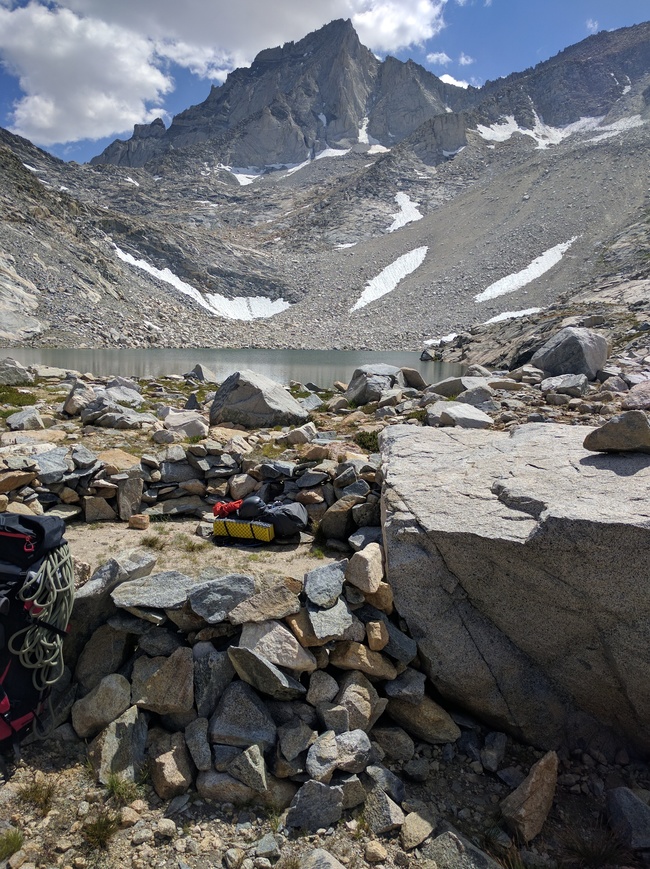 We awoke the next morning at six and by seven we were slowly picking our way through the talus to the base of the climb. Though it had dropped below freezing the night before, as we hiked up into the sun, the day began to warm up quickly. We were pretty excited to see our route mostly in the light; a previous forecast had shown summit temps in the upper 30s, a prospect we weren’t thrilled about. 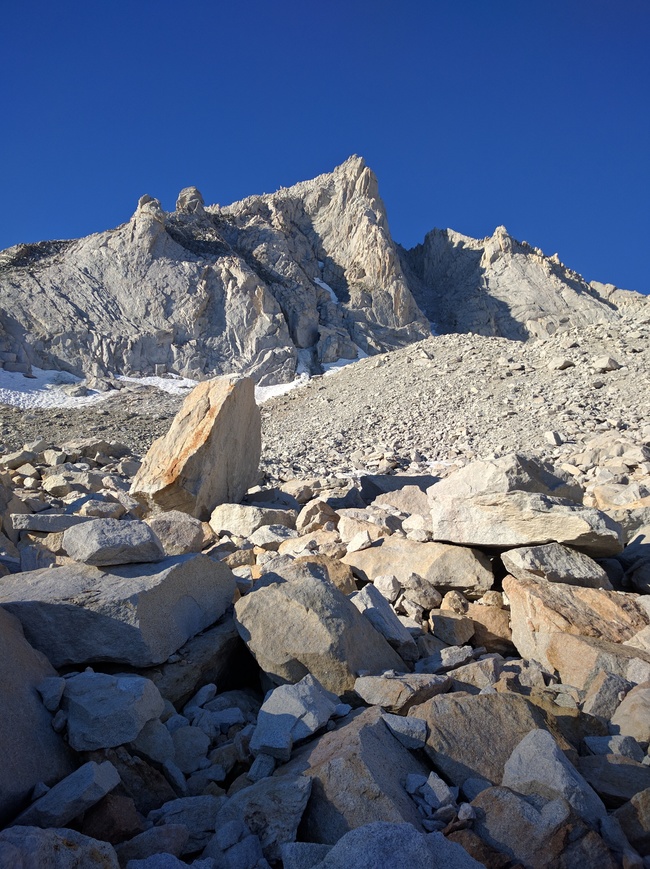 Our route selection up the talus probably could have been better. At one point we found ourselves climbing up a slope that seemed like a pile of stacked jenga blocks. Each step would cause a number of blocks to shift along with grinding beneath our feet. Not exactly confidence inducing.

Nevertheless, after an hour and change of talus trudging, we found ourselves at the base of the route. Another party was coming up behind us, so we quickly geared up and Eben starting leading the first 5.7 pitch up fourth class to 5.7 jamming and stemming. We quickly discovered we had set up the belay a bit too low as Eben ran out of rope 15 feet from the start of the second pitch. Luckily, after a short bit of simul climbing, Eben arrived at a comfy ledge.

The next pitch was my lead, wandering through steep 5.7 flakes to another huge ledge, which was thankfully in the sun. Both 5.7 pitches featured fun movement on great rock and were definitely a highlight of the route.

Eben quickly arrived and started up the next pitch of easy 5th. Unsurprisingly, he quickly climbed through the easy terrain. When the rope ran out we simul climbed the next pitch up to the base of the headwall. 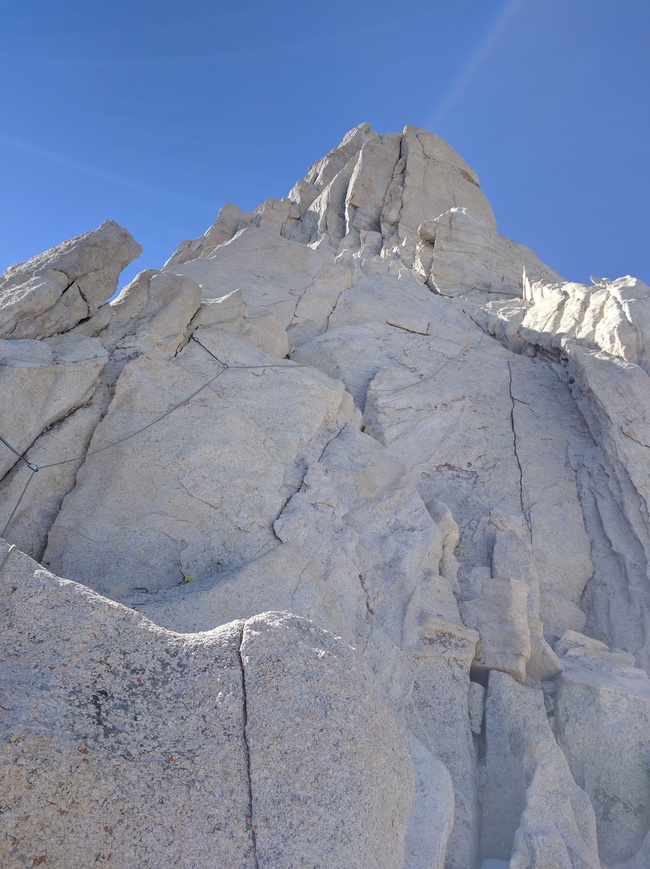 By 10:30, we arrived at the base of the crux pitch, advertising “awkward stemming and chimneying between large flakes.” As the wide crack master of the two of us, this was Eben’s lead. Though not too strenuous, the pitch served up its promised variety of thrutching, stemming, and jamming. Before long, we were through and onto the final 5 pitches of 4th and easy 5th.

The next pitch featured an awkward (but cool) natural tunnel that allowed us to cross from the west side to the east side of the arete followed by some uninspiring traversing across fourth class ledges. Though amusing, walking across dirty ledges made this the lowest quality pitch on an overall very enjoyable route.

After that pitch established us on the arete we were in for 4 pitches of 4th and easy 5th up the ridge to the summit. Rather than pitch it out, we switched to simulclimbing. The ridge had great exposure and a fun variety of fifth class moves as we wound our way to the top. 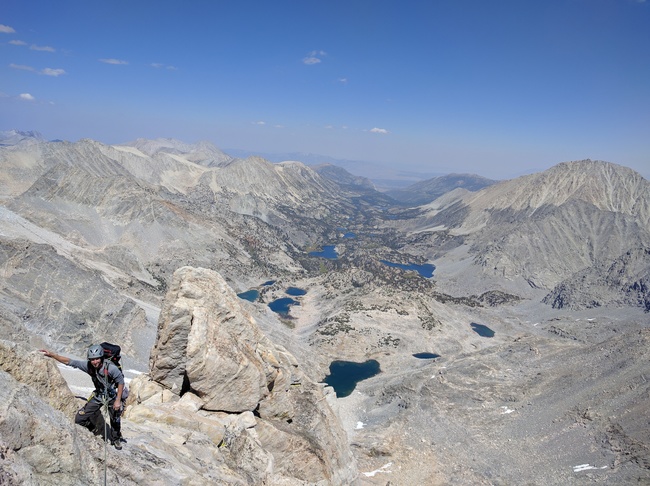 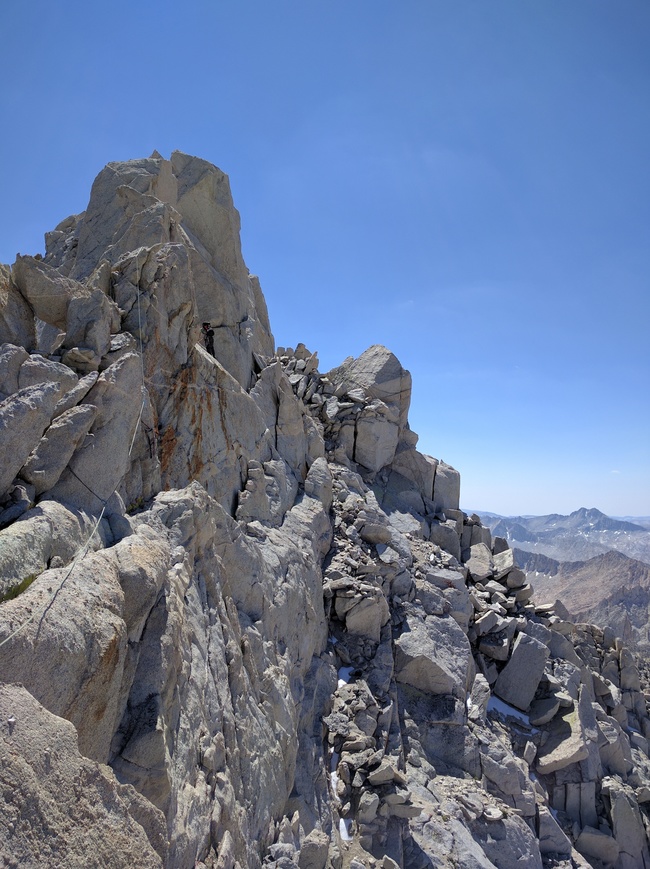 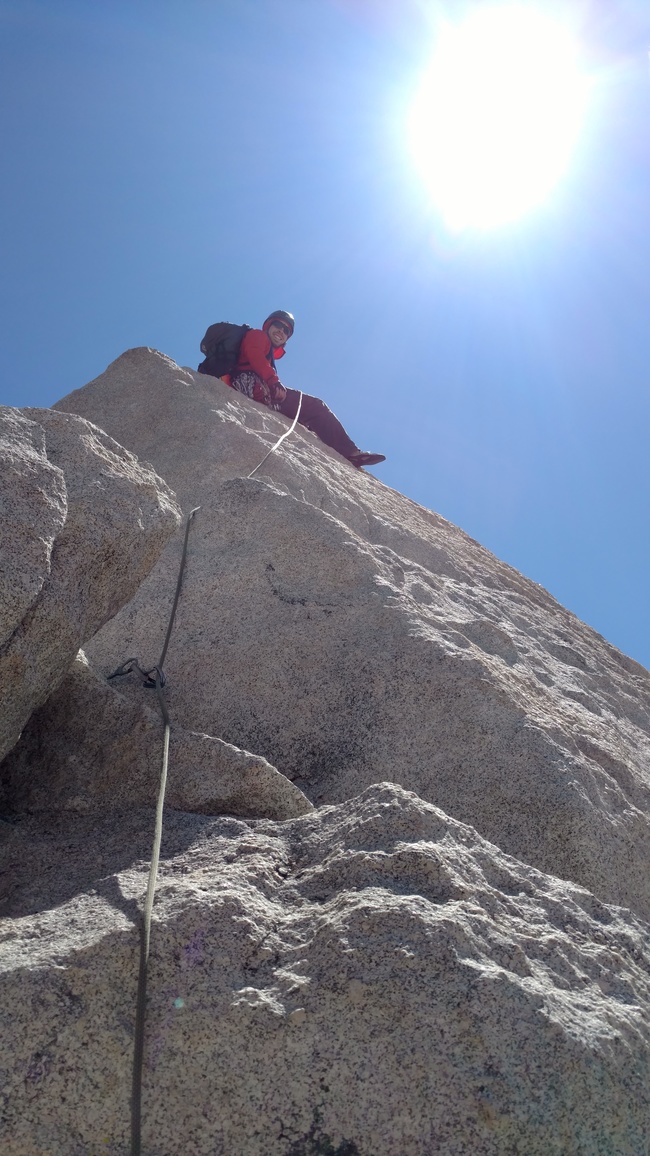 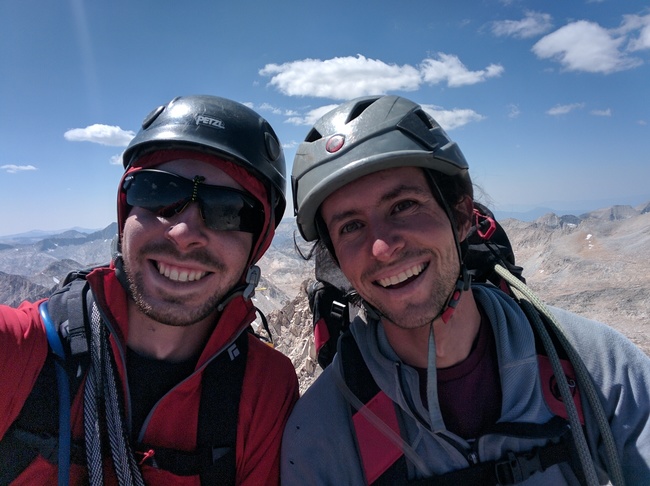 From thirteen thousand feet, we had an amazing view down Little Lakes valley. 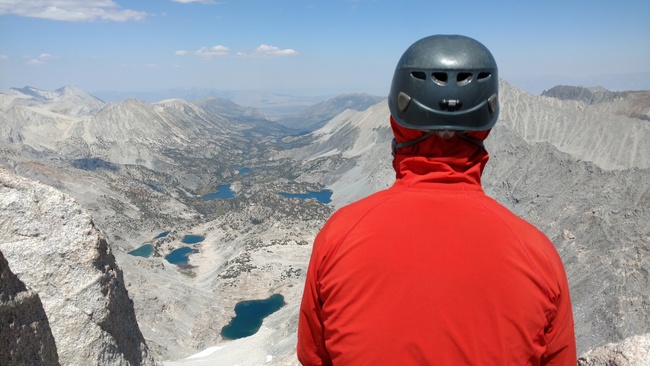 But we were only halfway done. After signing the summit registry and eating lunch, we rappelled off the summit to the talus below. 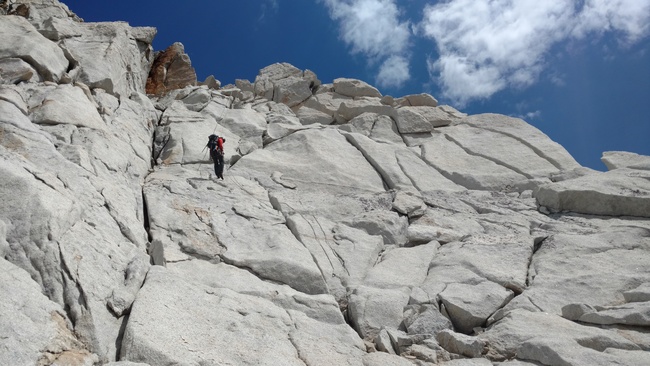 After a hour or so of scrambling down a nearly infinite field of talus we made it back to Dade lake. 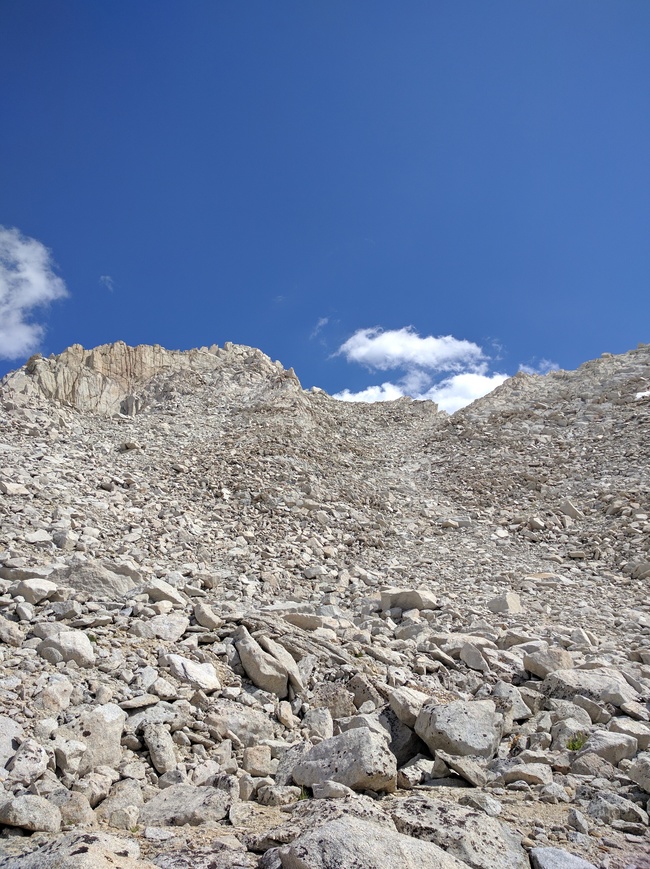 Since it had only taken us 5 hours to climb the 10 pitches, we had plenty of time before dark and took our time packing up. We had another hour of scree to look forward to followed by 3 miles of trail back to the car. 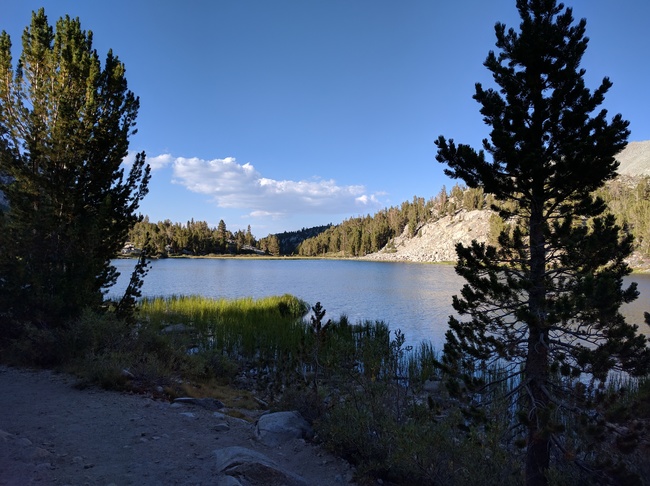 But by 6pm, we emerged from the wilderness, already talking about our next alpine objective.

This post is part 1 part of a 3 part series. Part 1 Part 2 Part 3 The code from this post, as well as the post itself, are on github. Until recently, regular expressions seemed magical to me. I never understood how you could determine if... Continue →